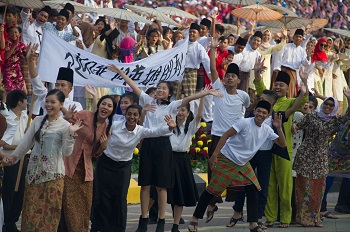 The performance was inspired by the aspirations of TN50 (Malaysia’s 2050 National Transformation plan) and verses from SGI President Daisaku Ikeda’s poem “Youthful Country with A Shining Future”, which was written for Malaysia on the occasion of his first visit to Malaysia in February 1988:

Malaysia, land of youth!
Malaysia, land of the future!
It is youth who will shoulder
your unbounded future;
more than anything,
their vigorous growth
contains the promise
of a flourishing tomorrow.

The performers formed spinning tops, colour guard displays and various other formations set to an energetic music. The climax of the performance was formation of six three-level human towers, signifying Malaysia’s 60 years of independence and the administration of six Prime Ministers. 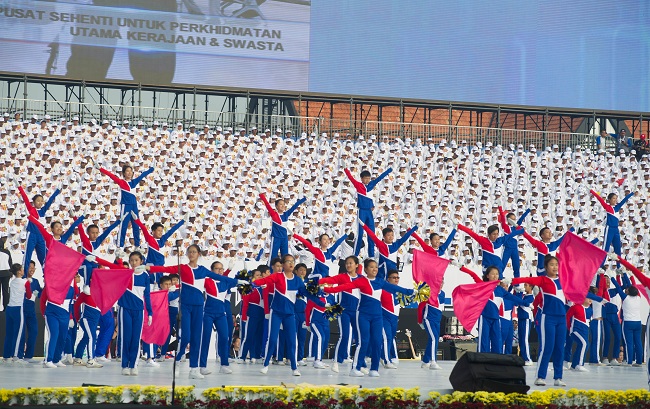 SGM General Director Koh Sia Feai attended the final rehearsal for the celebrations on August 29 and thanked all 240 performers and the support team for their efforts, later encouraging them to do their best on D-day.

He also attended the celebrations on August 31, and congratulated them for their wonderful performance, and thanked them for their valiant efforts. SGM Young Men’s Leader Andrew Looi was also on-hand to encourage the performers.

After the event, the performers cheered and some shed tears of joy, celebrating the culmination of their efforts.

The guest-of-honour was the Yang DiPertuan Agong, His Majesty Sultan Muhammad V. Also in attendance was Malaysian Prime Minister Dato’ Sri Mohd Najib Tun Abdul Razak, members of the cabinet, government officials, Members of Parliament, foreign dignitaries and guests from overseas. Members of the public also thronged the area around Dataran Merdeka to celebrate the anniversary of Malaysia’s independence.