August 6 (in 1945) is the day when the first atomic bomb in the world was detonated over Hiroshima. To further advance the cause of nuclear disarmament, on this day this year, SGM holds the Run for Peace 2019 media conference at Wisma Kebudayaan SGM with some 50 people in attendance.

In his welcoming remarks, SGM president Michael Kok expressed his gratitude to all guests for attending the press conference. He then recounted the origins of Run for Peace (RFP), which has its starting point in second Soka Gakkai president Josei Toda’s Declaration Calling for the Abolition of Nuclear Weapons made on September 8, 1957 in Yokohama, Japan. Mr Kok also mentioned that RFP is aimed at bringing people from various backgrounds together and encouraging them to create a culture of peace in their lives.

Next, RFP 2019 programme director Chia Kok Peng introduced the event and announced that this year will see 28 venues around the nation holding this event. He also said that the Department of National Unity and Integration (PERPADUAN) in the Prime Minister’s Department will be endorsing the event to further promote peace and harmony. He also announced several guests-of-honour who will be officiating the event in different venues, including YAB Chow Kon Yeow, Chief Minister of Penang (in Penang); YB Yeo Bee Yin, Minister of Science, Technology and Innovation (Muar, Johor), and YB Dr Xavier Jayakumar, Minister of Land, Water and Natural Resources (Morib, Selangor).

Besides that, this year’s RFP will also launch the #PeaceAction campaign on social media to encourage more people to practise the concept of peace in their daily lives. They could promote peace by saying something encouraging or smiling to people around them.

Later, the general director of PERPADUAN Datuk Baharin Idris gave a speech, saying that his department will give its full support to ensure the success of the event. He also mentioned that he will urge his colleagues from all over the nation to give their support to the event in their locality as this is the opportunity to raise the awareness of the need to promote peace in the community. 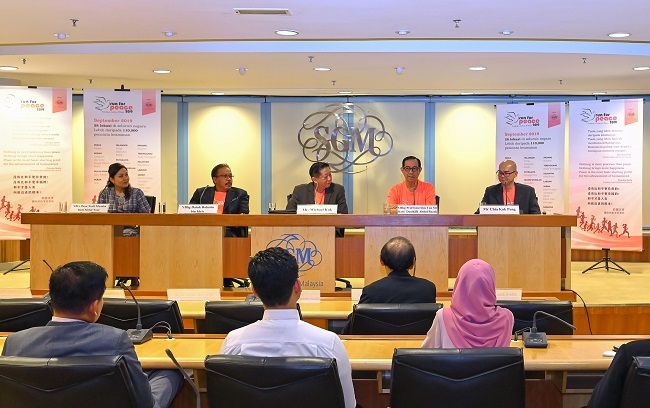 When interviewed later, he mentioned that SGM’s initiative in promoting peace is a very positive move. He said that people should be inculcated with the importance of maintaining peace and prosperity, and keep on participating in peace programmes so that the messages can be made memorable.

Following that, the rector of International Islamic University Malaysia (IIUM) Prof Emeritus Tan Sri Dato’ Dr Dzulkifli Abdul Razak also gave a speech where he mentioned that IIUM decided to support the event so that the students can engage in peace activities not only by studying the context but also through taking concrete actions and reflect on how they can create peace individually as violence is happening constantly, even in local communities. He then mentioned that he will urge more universities to take part in the event.

Later, in the question-and-answer session, Dato’ Dzulkifli further described how his late father Abdul Razak Abdul Hamid, the only Malaysian survivor of the atomic bombing in Hiroshima 74 years ago, emphasised the importance of peace through relating to others the tragic incident.

In addition, the under-secretary of the Multilateral Security Division in the Ministry of Foreign Affairs Puan Norli Muadza binti Mohd Noor spoke about people gradually forgetting the atomic bombing while being unaware of the existence of nuclear weapons. When the Treaty on the Prohibition of Nuclear Weapons (TPNW) was opened for signature, Malaysia is one of the first 50 countries to sign it in supporting the elimination of nuclear weapons. She further mentioned that Malaysia has stood by its ground through pushing several nuclear disarmament agendas.

For example, Malaysia chaired the third session of the 2019 Preparatory Committee for the 2020 Nuclear Non-proliferation Treaty (NPT) Review Conference which took place in April this year, and has called for all parties to work towards nuclear disarmament. She also said that the Ministry of Foreign Affairs will work closely with other ministries to ensure that Malaysia will ratify the TPNW as quickly as possible. She hoped that more parties will be interested following suit through RFP and other SGM peace activities. She also said that SGM should continue with its peace activities to spread the message of peace to the grassroots in the society.

Lastly, the theme song of RFP in Bahasa Melayu entitled, “Menuju Keamanan” was officially launched. Following that, the guests visited the “In Pursuit of Peace” exhibition located on ninth floor of the building to learn more about the SGI.