Book Launching Ceremony and Review of
“Hikmah Toleransi: Falsafah Kepemurahan dan Keamanan”
Restoring the spirit of tolerance as the path to peace

The International Institute of Islamic Thought and Civilisation of International Islamic University Malaysia (ISTAC-IIUM) and Soka Gakkai Malaysia (SGM) will jointly organise the book launching ceremony and book review of “Hikmah Toleransi: Falsafah Kepemurahan dan Keamanan” (The Wisdom of Tolerance: A Philosophy of Generosity and Peace) on January 7, 2023 (Saturday) at the Main Hall of ISTAC-IIUM.

Hikmah Toleransi is a dialogue between the late Abdurrahman Wahid (1940–2009), eminent Islamic leader and former president of the Republic of Indonesia, and Daisaku Ikeda, Japanese Buddhist thinker and President of the Soka Gakkai International. 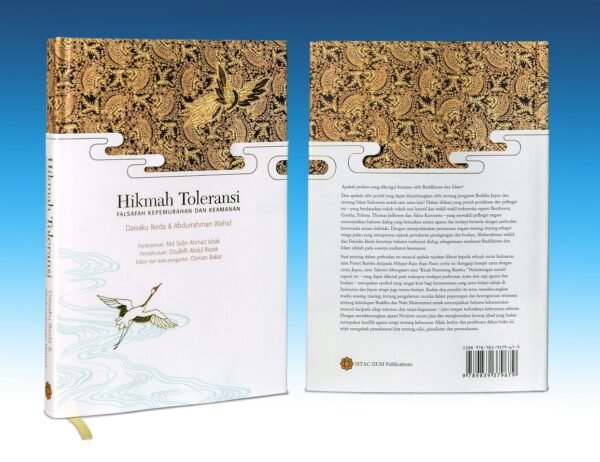 Upholding shared belief in the power dialogue to promote peace among civilisations and religions, they engaged in a series of discussions beginning in 2002 and exchanged views on topics such as the spirit of tolerance, mission of all religions, education, cultural reform, women’s and youth empowerment. Their dialogue, which reads like an open conversation between long-time friends, is also a personal one, in which they candidly shared childhood memories, as well as reflections on the people and artists that most impacted their growth.

In their dialogue, the former Indonesian President asserts, “There is no necessity for civilisations to clash just because they are different. And if they do clash, it is usually a result of misunderstandings or prejudices rather than actual differences…. The important thing is to respect our mutual differences and accept the diversity and plurality of the existing reality.”

Meanwhile, Ikeda states that, “True tolerance is one and the same with the refusal to accept any form of violence or injustice that threatens the worth and dignity of human life, and is exemplified by a life in which we do not ignore the plight of others but traverse upon the path to happiness together.” 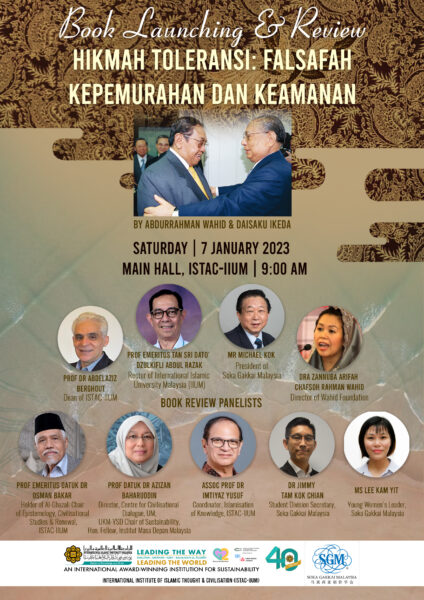 This Malay edition of the book published by ISTAC-IIUM Publications in 2022 is the 6th language edition, following Japanese, Indonesian, English, Chinese and French translations, creating a new milestone for this significant dialogue as it marked the 20th anniversary of the first meeting between the two authors. The book launching ceremony will be officiated by Prof. Emeritus Tan Sri Dato’ Dzulkifli Abdul Razak, Rector of IIUM, followed by a book review session.

It is hoped that the profound wisdom of tolerance, empathy, kindness and mutual respect shared by both leading thinkers in this book will serve as a ray of hope that illuminates our current society that is filled with prevailing mood of fear, prejudice and isolationism, paving the way towards building a harmonious and peaceful world.