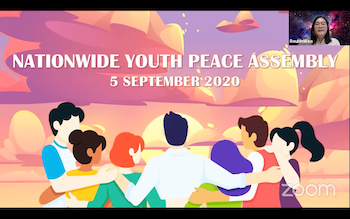 In his 2020 Peace Proposal, SGI President Daisaku Ikeda expressed with strong conviction that, “As long as there is solidarity among youth, there is no impasse we cannot surmount.”

In response to President Ikeda’s appeal, a total of 423 student division (SD) members nationwide conducted in-depth research and study on the topics mentioned in the Proposal as well as current global issues. These topics included poverty and human development, energy and environment, human rights and discrimination, nuclear disarmament, women's rights to education, climate change and building a culture of peace.

On September 5, SGM hosted the Nationwide Youth Peace Assembly in Mandarin and English, via the SGM Broadcast Channel where SD representatives from different states presented their research findings. The webinar garnered a viewership of 5,785.

Kicking off the presentation was a talk on poverty and human development focusing on social inequality and education opportunities in Malaysia. Finding that the gap of inequality is wide, SD members presented some solutions which included getting urban students to teach rural students and encourage people to get lifelong education. 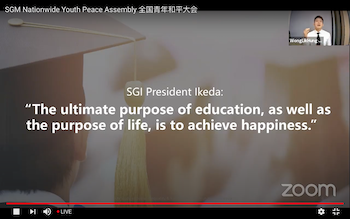 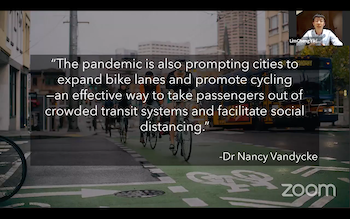 Following that was the finding on energy and environment which brought to the viewers’ attention on how energy is brought from the supplier to the users and showed those responsible for the problems such as air pollution. The SD members also proposed solutions such as generating more renewable energy and effective usage.

The current COVID-19 pandemic has seen an increase in the discrimination against migrant workers who undeniably have human rights and dignity too. SD members explored the situation and found it bleak and even inhumane. They proposed ways to improve their lives so that they could regain their dignity and decent livelihood.

Another urgent matter facing us today is the existence of nuclear weapons. Though 75 years have passed since the bombings of Hiroshima and Nagasaki, some nuclear weapons states are instead upgrading their nuclear arsenals. 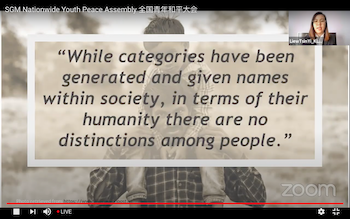 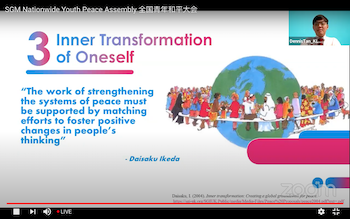 In the final presentation, SD members stated how crucial peace is to the advancement of humankind and how building a culture of peace is possible through ways such as dialogue and inner transformation in each person.

In conclusion, SGM young men’s division vice-leader Dinesh Chandren, in the English session, urged the participants to never leave behind those struggling in difficult circumstances, attend to their actual sufferings and impart hope to build a world without war and where all can live with dignity.

Meanwhile, in the Mandarin session, SGM young women’s division vice-leader Sherry Koay focused on the interconnectedness of our world. She also called on the viewers to be more aware of the causes of climate change and also take passionate action to expand the ripples of peace. 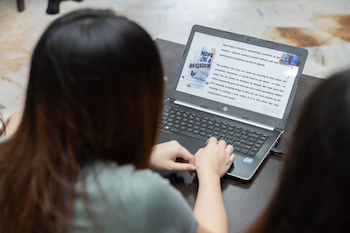 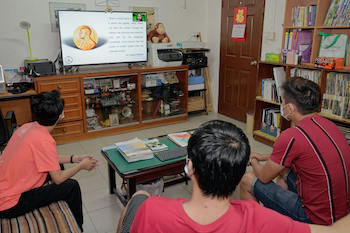