From July 28 to September 2, 2018, SGM held an exhibition entitled “Peter Liew Retrospective” at the Soka Exhibition Hall and Hong Wen Exhibition Hall in Wisma Kebudayaan SGM. The retrospective is Peter Liew’s first such exhibition, featuring 63 oil paintings and several other sketches he has created in his 40-year art career.

Born in 1955 in Tapah, Perak, Peter Liew grew up amidst the lush greenery of Mother Nature and developed a desire to become an artist at a young age. He studied fine arts at the Malaysian Institute of Art (MIA) and lectured there for 13 years after graduating. 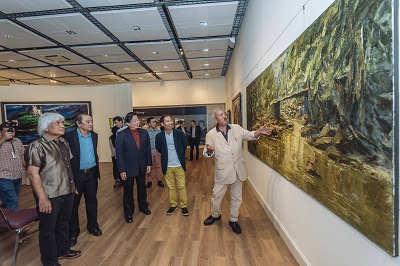 Through many years of passionate and determinate art practice, self-study and hardship, he has forged his own style and art language. His trademark is his characteristic use of thick, colourful slabs of paint, or impasto, applied with the palette knives. Repeated use of such strokes has given his artworks a very powerful and rhythmic feel while displaying his emotions, connection to and deep love for nature.

The paintings, mostly large in size, were organised chronologically in three themes namely “Nature”, “Cultural Heritage” and “The Faces” of famous personalities who have left their mark on the world. “The Faces” section also included a portrait of SGI President Ikeda which was painted and presented to him in 2016.

In his welcoming speech, SGM General Director Koh Sia Feai mentioned that Peter Liew’s “journey of art was never an easy one. Yet, he does not have regrets nor feel tired of this life. Instead, he always brims with enthusiasm and conviction for art.”

On hand to officiate the opening of the retrospective was YB Prof Dato’Dr Mohamed Najib bin Ahmad Dawa, Director-General of National Art Gallery of Malaysia. In his speech, he said that Peter Liew does not only capture scenery, but rather his emotions, thoughts and approaches in the process of creation.