In conjunction with SGM’s Month of Sustainable Development in April, SGM held the “Hijau III Loving Nature Group Exhibition” at Wisma Kebudayaan SGM from April 8 – 23, 2017. This exhibition was the group’s third exhibition and the first one to be organised by SGM.

Representing SGM was SGM Deputy President Johnny Ng who, in his welcoming speech, said that such an exhibition is a “good avenue to remind everyone that we all live on the same earth…and therefore, we have the mutual responsibility to preserve its well-being and ensure that our children will inherit this heritage.”

In his speech, exhibition coordinator and artist Chin Kon Yit mentioned that the exhibition was a venue for artists to express their love for nature they live in and the Earth through their artworks. Chin quoted German cosmonaut Sigmund Jähn, “Only when I saw the Earth from space, in all its ineffable beauty and fragility, did I realise that humankind’s most urgent task is to cherish and preserve it [the Earth] for future generations.”

On hand to officiate the exhibition was Pandamaran assemblyman YB Eric Tan Pok Shyong, representing YB Dato’ Teng Chang Khim, Senior Executive Councillor of the state government of Selangor. In his speech, he quoted Dato’ Teng’s message in the art catalogue congratulating SGM for successfully blending and promoting art and environmental protection, which can only be promoted through education. He hoped SGM will continue with this effort so that environmental protection will not merely become a principle to be adhered to but a part of daily life. 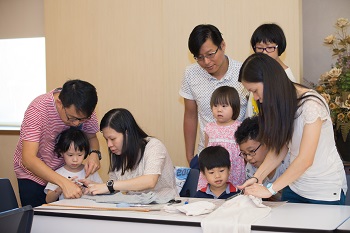 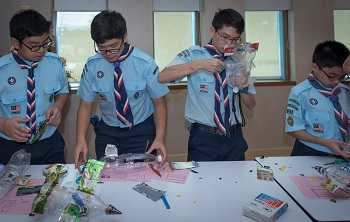 The exhibition was made successful through Chin Kon Yit’s efforts in coordination, gathering twenty-five other local artists who drew artistic inspiration from their love for nature. Coming from diverse backgrounds and ages, the artists included Goh Ah Ang, Koh Shim Luen, Lok How Yuan and Tham Siew Moi. During the opening, a dance performance was presented by Anthony Meh Kim Chuan and dancers from the Dua Space Dance Theatre while NetsEco sponsored the publication of the art catalogue.

Numbering more than seventy pieces, their artworks encompassed numerous subjects found in nature such as flora and fauna, insects, animals and even aborigines whose lives are intertwined with the natural world. The works were executed in various styles and mediums such as watercolour, oils, acrylics, mixed media and batik but apparent in all of them was a common trait – a deep love for nature.

At the same time, a free mobile app MAPTING was also introduced to the audience. Created by Soka Gakkai International (SGI) and the Earth Charter International (ECI), this app aims to inform more people about the Sustainable Development Goals (SDGs) and promote sustainable actions through video and photo sharing. Among the 17 SDGs are the goals to end poverty, hunger and promote well-being and equality. 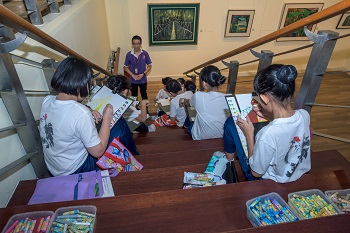 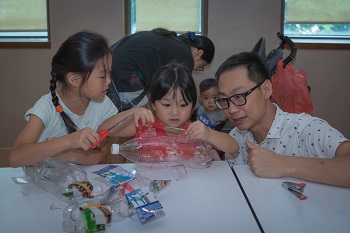 Following the opening was a series of related activities taking place in WKSGM but on different weekends in April. Participants were encouraged and taught to make handicrafts, lanterns or bags by re-using and recycling old unwanted stuff such as t-shirts, newspaper or magazines.

SGM also collaborated with The World Wide Fund for Nature, Malaysia (WWF-Malaysia) to co-organise an event titled “Sembang” (Chit-chat) on April 22, 2017, which is designated as the International Earth Day. Sembang was a bilingual story-telling platform for youth to share their ideas on the environment.