Peace and Education Nuclear Disarmament Everything You Treasure Exhibition

SGI President Daisaku Ikeda has mentioned that “Nothing is more precious than peace. Peace is the most basic starting point for the advancement of humankind.” In line with the SGI leader’s spirit, Soka Gakkai Malaysia co-organised a peace programmed entitled “21st Century Youth: A Youthful Solidarity for Peace” with the Academic of Islamic Studies (API) of University of Malaya (UM) on October 24 and 25, 2019.

The programme consisted of a peace forum and the “Everything You Treasure: For a World Free from Nuclear Weapons” (EYT) exhibition. The programme was initiated and made possible by a group of peace-loving UM students – which included SGM student division members studying at UM. UM’s Centre for Civilisational Dialogue (CCD), the Centre for the Initiation of Talent and Industrial Training (CITrA) and Cultural Centre were also partners in this endeavour aimed at expanding waves of peace in UM.

The highlight of the peace programme is the forum titled “A Youthful and People-centred Approach towards Peace and Harmony” at API’s auditorium on October 24. Attended by some 520 people, mainly students and members of the UM community, the forum was inspired by Soka Gakkai International (SGI) President Daisaku Ikeda’s 2019 Peace Proposal. 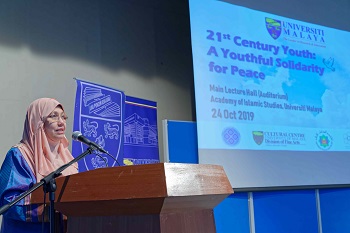 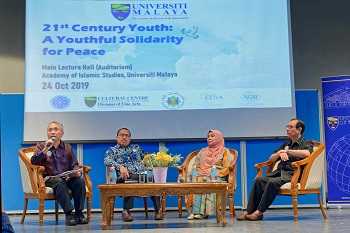 In her welcoming speech, Prof Datin Dr Raihanah Abdullah, director of API and the “21st Century Youth” programme spoke about the importance of accepting diversity and dialogue leading to peace and harmonious coexistence.

Next, CiTrA director Dr Wendy Yee Mei Tien, introduced President Ikeda’s 2019 peace proposal, “Towards a New Era of Peace and Disarmament: A People-Centred Approach.” She also touched on the origin of his peace proposals, which tracks back to second Soka Gakkai president Josei Toda and his Declaration Calling for the Abolition of Nuclear Weapons in 1957.

Dr Dzulkifly, a second-generation hibakusha (survivor of the atomic bombings), spoke about his father’s experience of surviving the atomic bombing of Hiroshima on August 6, 1945. The late Dato’ Abdul Razak Abdul Hamid, was a 19-year old university student in Hiroshima and was 1.5 kilometres away from the epicentre. 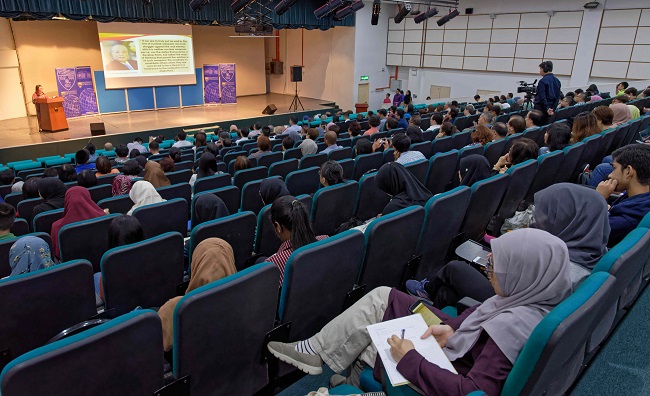 He showed photos of the bombings and drawings left by survivors detailing the bombings, and stressed on how important it is to abolish nuclear weapons as highlighted by President Ikeda. He said it’s crucial to make nuclear weapons abolition our personal cause and strive to find peace with ourselves first.

Following that, Prof Dr Sumiani Yusoff took the stage to speak passionately on the role of universities in acting as central hubs for promoting the Sustainable Development Goals (SDGs). She urged the audience to live a sustainable lifestyle, starting with their daily lives where certain actions can be done easily, such as not using single-use plastics or wasting food. She highlighted that each of us has the duty to look after the well-being of the environment around us and university students, who are change-makers, have the knowledge and research facilities to be empowered to start promoting actions towards achieving the Sustainable Development Goals (SDGs). After all, we have only one Earth to live in.

The third panellist Dr Mohd Maliki was equally passionate in speaking on mainstreaming youth participation in shaping a peaceful world. He spoke about his struggles as a student and voluntary work, which included supplying clean water to remote villages, showing how important it is to engage with young people and provide opportunities for them to become catalysts for building peace. He asserted that youths are assets, instead of a burden, whose voices should be heard and who can change the world.

The forum came to an end with a lively question-and-answer session with questions showing the audience’s strong interest in the promotion of peace. In his conclusion, Prof Dr Boey quoted President Ikeda in emphasising that the future of our world will be determined by the passion and power of the next generation of leaders and that meaningful glory is found in protecting and nurturing the youth. 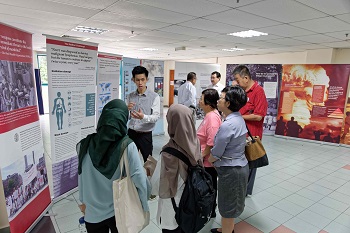 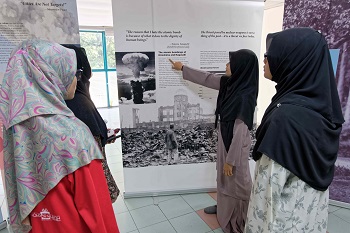 In interviews conducted after the forum, the panellists praised the organisers’ efforts for raising youths’ awareness on challenges that threaten our world such as nuclear weapons and climate change. They also praised SGM’s efforts in creating platforms for youth to give full play to their talents to contribute to the betterment of society.

The EYT exhibition was held on October 24 and 25 at two locations, the foyer of the API auditorium (October 24 only) and the foyer of Dewan Tunku Canselor (DTC), the venue where President Ikeda was awarded an honorary doctorate in humanities by UM (which was received on his behalf by SGI Vice-President Hiromasa Ikeda).

Over the two days, close to 400 people viewed the exhibition at the two venues.