On April 29 and 30, SGI Study Division Vice-Leader Sei-ichiro Harada visited Malaysia for the eighth time to conduct study session for SGM leaders. This time, the sessions were held at the SGI Asia Culture and Education Centre (SGI ACEC) in Johor Bahru, with the two main study sessions broadcasted live to 31 SGM centres throughout the nation. SGI President Ikeda sent a message to the seminars.

This is also the first time Mr Harada has visited the SGI ACEC. Upon his arrival at the Centre in the morning of April 29, he was taken on a tour of the premises by key SGM leaders led by General Director Koh Sia Feai. 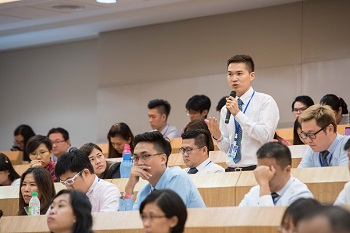 In the afternoon, he conducted a heartfelt dialogue with SGM youth division leaders at the Soka Lecture Hall of the Centre. Before beginning the dialogue, he spoke on SGI President Ikeda’s activities between early-March and mid-April. During this period, President Ikeda visited several Soka Gakkai centres, such as the Tachikawa Culture Centre and Tokyo Toda Memorial Auditorium, and encouraged members he met in these visits. He also visited the Soka Schools in Tokyo and Soka University and exchanged greetings with staff members.

During this session, Mr Harada sincerely answered many of the youth’s questions on faith, practice and study. He offered practical advice on encouraging fellow members who were challenging serious difficulties, using the Gosho and President Ikeda’s guidance as his basis. He also responded to questions on studying the Gosho and President Ikeda’s guidance.

During this session, the Men and Women Division leaders were conducting a kick-off for studying “Great Mountain” at the Ikeda Peace Hall (IPH) of the Centre.

Mission of the Bodhisattvas of the Earth

On the evening of April 29, he conducted a study session for the over 600 leaders present and other SGM leaders attending broadcast sessions throughout the nation. He spoke on “The Mission of the Bodhisattvas of the Earth in the New Era of Worldwide Kosen-rufu – Learning from the Preamble to the Soka Gakkai’s Rules and Regulations.”

In 2014, with the establishment of the Hall of the Great Vow of Kosen-rufu and the launching of the New Era of Worldwide Kosen-rufu, and to clarify the identity of the Soka Gakkai that has spread Nichiren Buddhism as a world religion, the Soka Gakkai amended its Rules and Regulations.

In this study, Mr Harada spoke on the mission of the Soka Gakkai as the only orthodox organisation carrying out kosen-rufu in accordance with Nichiren Daishonin’s intent and decree.

He also spoke on President Josei Toda’s prediction that “Soka Gakkai Buddha” will be cited in the Buddhist sutras of the future. As long disciples of successive generations strive for kosen-rufu and act in the spirit of many in body, one in mind, they will exhibit the eternal life-force of a Buddha working to guide all living beings to enlightenment. 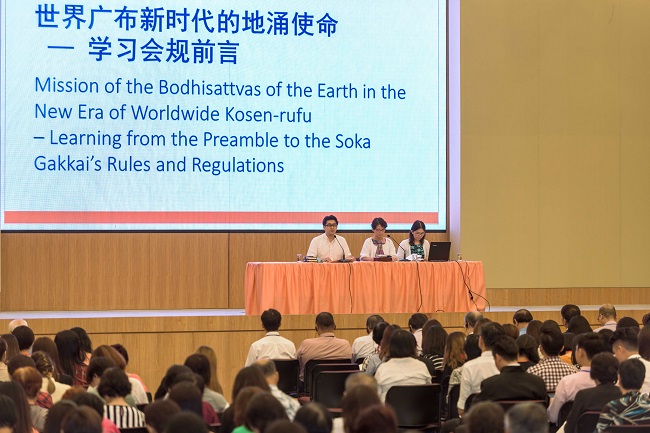 On the morning of April 30, Mr Harada conducted a study on “Letter from Sado.” This letter was written on the twentieth day of the third month, 1272, some five months after Nichiren Daishonin had arrived on the island of Sado to begin his exile there.

This Gosho is regarded as the “Gosho of the Soka Gakkai”, as the three founding presidents have practised the teachings found within with their lives based on selfless dedication to faith.

Drawing on key passages from this Gosho, Mr Harada spoke about the significance waging an all-our struggle in the same spirit as our mentor and remaining fearless in the face of daunting challenges.

He placed emphasis on the passage: “When an evil ruler in consort with priests of erroneous teachings tries to destroy the correct teaching and do away with a man of wisdom, those with the heart of a lion king are sure to attain Buddhahood.” (WND-1, p. 302)

The “heart of a lion king” is the key in attaining Buddhahood and overcoming all challenges for expanding kosen-rufu. Having “the heart of a lion king” means summoning unequalled courage when adversity strikes and waging an all-out struggle in the same spirit as the mentor. Those who can do so are certain to attain enlightenment.

During his two-day visit, Mr Harada also held discussions with various groups such as the SGM Study Department. During these discussions, the participants exchanged views on expanding the organisation through solidifying Buddhist study activities.