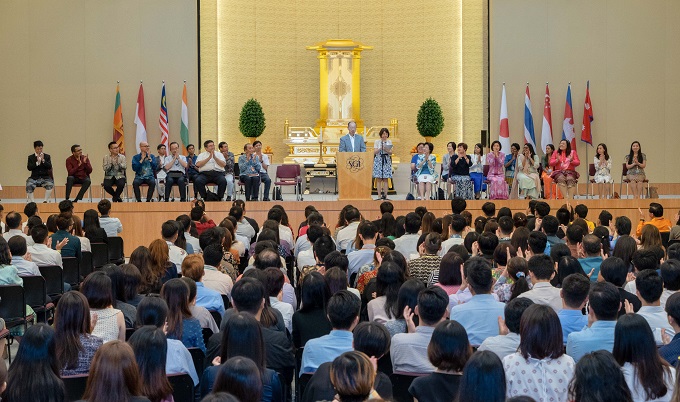 On the evening of August 24, the 98 delegates and SGI leaders were joined by 315 SGM Youth Division members from various states for the Second SGI South Asia Youth Leaders Meeting.

The youth of South Asia made the determination to strengthen their faith more than ever and fulfil their mission for kosen-rufu, signifying the rise of the sun of hope that brings the light of peace and happiness to all over Asia. 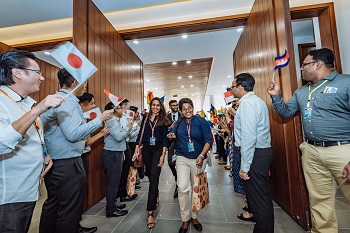 This marks the first time the SGI ACEC – which was officially opened on November 27, 2016 – welcomed people from all over South Asia for a youth training course. Upon arrival, delegates made joyous gestures and shouted their country slogans passionately, creating an electric atmosphere even before the training course began.

In his welcoming speech, SGM General Director Koh Sia Feai urged the youth to expand their network of friendship and strengthen their faith so that the kosen-rufu movements of their respective countries can progress tremendously. Mr Ushioda then read a message from SGI President Daisaku Ikeda, part of which says: “It is my sincere hope that all of you, the youthful leaders of the respective countries, will burn with pride and passion in dedicating your lives to fulfilling the world’s foremost mission and advance together in harmonious unity in the spirit of many in body but one in mind, setting a role model for all.”

In his speech, Vice-President Tsutsumi stressed that as long there is one person willing to strive for kosen-rufu, Nichiren Buddhism will expand far into the future. To stand alone is to realise one’s mission for kosen-rufu. He also emphasised that the future of the organisation depends on the youth.

The second day of the training course, August 24, also marked the 71st anniversary of President Ikeda’s Buddhist practice. In the Gosho study session held that day, Mrs Kasanuki spoke on SGI President Ikeda’s series of lectures titled “To My Dear Friends of the Youth Division” from the “The Buddhism of the Sun – Illuminating the World” series. She explained that to firmly uphold the vow of mentor and disciple no matter what is the same as attaining Buddhahood. She urged the delegates to respond to President Ikeda in this spirit.

Mr Takeoka then took the stage, encouraging the delegates by saying those who base their lives on the Gosho will never be defeated. Ms Oyama then said studying the Gosho will undoubtedly foster capable people, citing the examples of Young Women Division members challenging to finish the 30 Gosho being studied by the SGI Ikeda Kayo-kai worldwide.

In the closing ceremony on the final day, Mr Takeoka again urged the youth to stand at the frontlines of kosen-rufu as the prime point of transformation and the wellspring of hope. Mrs Kasanuki encouraged the youth to be global leaders who place the happiness of members first.

Vice-President Tsutsumi then closed the training course by sharing President Ikeda’s “Nine Points for Victory in Kosen-rufu and Society” which includes rising early, valuing and respecting your juniors, and keenly distinguishing between good and evil, right and wrong. He urged all youth to each make a powerful determination and performing human revolution for the sake of advancing kosen-rufu.

Over the three days of the training course, the youth encouraged each other, transcending all barriers, strengthening their faith and continue to “scale the mountain of kosen-rufu in the 21st century”, thus writing a new chapter for kosen-rufu in Asia.

The Second SGI South Asia Youth Division Leaders Meeting was held on August 24 at the Ikeda Peace Hall of the SGI ACEC. Before the meeting began, the SGM Kuala Lumpur Young Lion Martial Arts Group and Band of Hope performed for the 400 youth present, creating a vibrant, electric atmosphere in the hall. Together, the youth sang This Is My Name, which was introduced at the World Youth General Meeting in March, and Forever Sensei, as an expression of them upholding the spirit of the oneness of mentor and disciple.

In his congratulatory message, President Ikeda expressed his expectations for the youth gathered: “The protagonists of the 100th anniversary of the Soka Gakkai’s founding are none other than all of you who have gathered here today” and “though you and I may be physically apart and though we may not be able to meet, our hearts are always together as we are connected by our shared vow for kosen-rufu.” He further stated: “I call on the youth of South Asia to take the lead in propelling the advancement of the Youth Division of the entire world! I am counting on you to bring cheers of victory to resound in the new era!”

In her speech, Ms Kasanuki, she said now we should make studying The New Human Revolution a key focus, urging the youth to take the lead in spreading the flame of studying this serialised novel and conducting dialogue with their mentor in their hearts, thereby engraving the spirit of the oneness of mentor and disciple.

Vice-President Tsutsumi then took the stage and praised the youth of the eight countries for their growth, stating that President Ikeda would be happy to see this. He urged all present to make a firm resolve to expand the ranks of the youth by encouraging and fostering their fellow youth.

The meeting ended in exuberant spirits with everyone singing March Towards the 21st Century, linked shoulder-to-shoulder.

“Everything You Treasure” Exhibition Held in Penang ...