The highlight of this event is the conferment of the titles of Honorary Fellow and Doctor Fellow by RI to SGI President Daisaku Ikeda for his longstanding contributions to global peace-building and humanity via peace, culture and education. This conferment took place in the afternoon of the first day. In the citation, RI Chancellor FDr Dr Samuel M. Salvador lauded President Ikeda’s achievement as a Buddhist philosopher, global peace-builder, educator, author and poet. He also praised President Ikeda’s dedication to realising the vision of his mentor, second Soka Gakkai president Josei Toda. 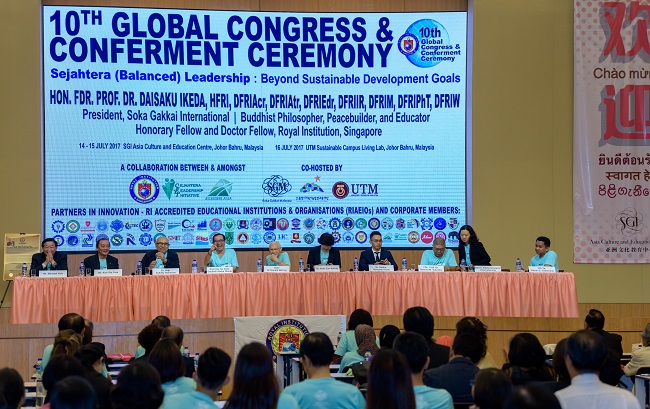 In a message expressing his appreciation, President Ikeda said: “I am well aware of the lofty tradition of your institution, which has made manifold contributions in the fields of peace, education and humanism over the years, in particular, by serving as the bridge to connect people around the world who pursue peace and harmonious solidarity….please be assured of my firm resolve to further contribute towards peace and humanism as a way to respond to your extraordinary generosity.”

In opening the GCCC, Dr Salvador congratulated SGM on Run for Peace, calling it a noble endeavour that inspires people to work in harmony. He also stated the need for effective and balanced leadership to lead people of out the confusion of current times, stressing that peace begins with each person.

President Ikeda also sent a special message to the GCCC, which was read out by SGM President Michael Kok. In his message, President Ikeda expressed his appreciation to all those who are attending this event, and called on the youth to work together towards the achievement of the Sustainable Development Goals (SDGs). He highlighted the similarities between the principles of Sejahtera and the humanism of the Middle Way. He also praised SGM’s efforts of organising Run for Peace for the seventh time. “As someone who has long been active in the pursuit of world peace, I pledge that, so long as I live, I will continue to run together with this great procession of the common people here in Malaysia seeking the achievement of the SDGs.”

Prof Tan Sri Dzulkifli Abdul Razak, Founding Convener of the Sejahtera Leadership Initiative (SLI) delivered his address. He called for transformational leadership that inspires the whole being, promotes a sustainable worldview that encompasses humanity and is imbued with humility and professional will. He remarked that Sejahtera-based leadership aims to promote eco-existence (from “ego” to “eco”). 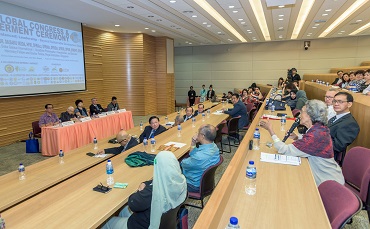 Dr Park Eun-kyung, chair of the board of directors for the Regional Centre of Expertise (RCE), Tongyeong. The RCEs form a network of formal, non-formal and informal education and learning-related institutions promoting education for sustainable development (ESD) at regional local levels. She spoke about the Tongyeong Sejahtera Centre, which was built on land with forest, wetlands, paddy fields and other environmental features. It also has an aquatic life centre and vegetable garden.

Dato’ Dr Ronald McCoy, Representative and Negotiator, International Physicians for the Prevention of Nuclear War (IPPNW) and the International Campaign to Abolish Nuclear weapons (ICAN), spoke on the adoption of the Treaty for the Prohibition of Nuclear Weapons by the UN on July 7. Nuclear weapons, one of the gravest threats facing humanity, are now illegal. This treaty represents a great step forward for humanity. This treaty will enter into force 90 days after ratification by 50 states.

Dr Nasha Rodziadi Khaw from Universiti Sains Malaysia (USM) spoke on the etymology of sejahtera and its historical-cultural context. Though the origin of the word sejahtera is still unclear, it may have been derived from Sanskrit terms. The practice of an environmentally-sustainable lifestyle has existed in the Malay peninsula for a long time, based on only obtaining what is needed, without excess.

The second day of the event began with a panel discussion on the formulation of sejahtera resolutions.  The panel consisted of SGM Vice-President Prof Dr Christopher Boey, Dr Park Eun-kyung, Dato’ Dr McCoy and Dr Nasha. It was chaired by Prof Dzulkifli.

Dr Boey spoke on “Perspective on the Way Forward for Global Peace and Happiness.” He stressed that we must not lose hope when facing all the grave challenges confronting humanity, and strive to transcend differences in the search for balanced solutions to these challenges. He spoke on the three elements of global citizenship as outlined in President Ikeda’s lecture at Teachers College, Columbia University in 1996. Dr Boey echoed President Ikeda’s belief that youth exchanges and friendship among youth people is important in establishing peace and overcoming xenophobia.

Dr McCoy spoke of his experience of harmonious diversity in Malaysia while growing up, highlighting that life contains great diversity. We should love differences and build stronger relationship to others. Dr Park spoke on the Rio Declaration and the need to embrace the principle of Common but Differentiated Responsibilities in preserving the environment. Dr Nasha said we need to study our past and learn from it, further stressing that the principles of sejahtera has long existed in Malaysian society.

The panel then fielded questions from the audience, embarking on a lively exchange. Audience members asked about internalising the principles of sejahtera, introducing it into learning syllabi and reforming education. Panel members provided well-thought of answers as well, with Dr Boey speaking on the concept of human revolution promulgated by the SGI.

The panel discussion was followed by presentations of research papers by RI members and fellows. The presentations covered diverse topics such as urban development, educational leadership, environmental sustainability and occupational health and safety.

UTM academics then spoke on the various environmental sustainability initiatives that UTM has pioneered, and its benefits to the university and local community. This includes savings in energy consumption, recycling of waste components in local areas and youth involvement. Participants were then taken to a tour of an eco-house built within the campus grounds and an orchard.

Participants of the three-day programme expressed their delight at the event and praised the organisers for the coordination. 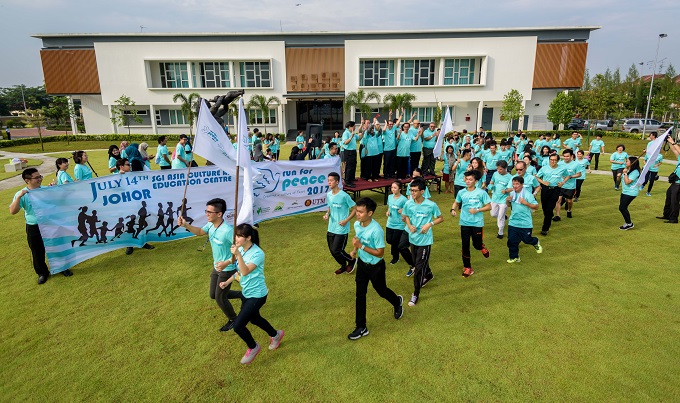 On the morning of July 14, the 2017 edition of Run for Peace conducted a symbolic flag-off on the grounds of the SGI Asia Culture and Education Centre (SGI ACEC). Over 200 people participated in this symbolic flag-off. This flag-off was held just before the start of the 10th Global Congress and Conferment Ceremony co-organised by the Royal Institution, Singapore (RI), Sejahtera Leadership Initiative (SLI) and Soka Gakkai Malaysia (SGM).

Before the flag-off, SGM Deputy President Johnny Ng Teck Sim said that Run for Peace aims to send a message to the world: We, the citizens of the world, want peace. Quoting SGI President Ikeda’s words, “Nothing is more precious than peace”, he also remarked that this year marks the 60th anniversary of second Soka Gakkai president Josei Toda’s Declaration Calling for the Abolition of Nuclear Weapons. He urged all present to dedicate themselves to promoting respect for the sanctity of life.

Prof Tan Sri Dzulkifli Abdul Razak, Founding Convener of SLI, took the stage, and spoke on the importance of developing a culture of peace first within ourselves. Run for Peace is an activity which engages people to work for peace in a practical manner.