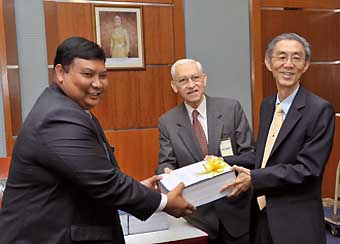 On June 11, 2010, SGM and the Malaysian Physicians for Social Responsibility (MPSR) presented a petition of 127,357 signatures from Malaysians calling for the abolition of nuclear weapons to the Ministry of Foreign Affairs, Malaysia. Mr. Liu Cheng Choong, Deputy President of SGM and Dato’ Dr. Ronald S. McCoy, President of MPSR jointly presented the signatures to Dato’ Zainol Abidin Omar, Deputy Secretary-General II of the Ministry of Foreign Affairs at Wisma Putra, Putrajaya.

The petition was in support of the International Campaign to Abolish Nuclear Weapons, a global grassroots movement initiated by the International Physicians for the Prevention of Nuclear War (IPPNW) for total nuclear disarmament through a Nuclear Weapons Convention. The 127,000 plus signatures were collected in conjunction with the exhibition “From A Culture of Violence to A Culture of Peace: Transforming the Human Spirit” organised by SGM and MPSR since 2007.

The first Transforming Human Spirit exhibition was launched by the then Minister of Foreign Affairs Tan Sri Syed Hamid Albar in September 2007 in Kuala Lumpur. The exhibition highlights the threat of nuclear weapons – which can kill hundreds of millions of people in a few hours and bring about the end of human civilisation – and the role of ordinary citizens in creating a culture of peace and a world without nuclear weapons. The exhibition was subsequently shown at 28 venues across the nation and attracted more than 180,000 viewers, the majority being young people and students.

In his speech, Dato’ Dr. Ronald S. McCoy said, “The world has been charting a dangerous nuclear course since the 1995 NPT review and extension conference. We have witnessed nuclear proliferation and the threat of more. There are now nine nuclear weapon states, when there were once only five.” He added that governments have already negotiated treaties banning biological and chemical weapons, anti-personnel landmines and cluster munitions – therefore it is time to work towards a Nuclear Weapons Convention. 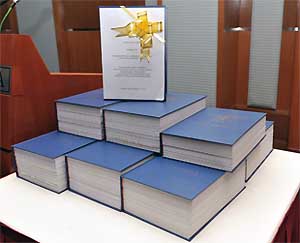 “Malaysia could be a trail-blazer,” Dato McCoy stressed, by launching immediate preliminary discussions, with like-minded countries. “Making a start on the preparatory work for a Nuclear Weapons Convention will require courageous governments, committed elected representatives, and dedicated citizen activists to take individual and collective initiatives that will propel negotiations along a sustainable path to zero.”

In his remarks, SGM Deputy President Liu added that SGI is committed to the movement for abolition of nuclear weapons. He said, “The youth members of Soka Gakkai in Japan had also initiated a petition calling for the adoption of a Nuclear Weapons Convention. They collected between January to March 2010, a total of 2,276,167 signatures which on 11 May 2010 was presented to Ambassador Leslie Gatan, adviser to the president of the Nuclear Non-Proliferation Treaty Review Conference and UN High Representative for Disarmament affairs Sergio Duarte at the Soka Gakkai International USA Culture Centre in New York.”

Commending the efforts made by SGM and MPSR, Dato’ Zainol Abidin Omar said that the support for the petition clearly demonstrates the common voice of Malaysians who support the abolition of these weapons of mass destruction. Such efforts will help to strengthen Malaysia’s stance on this matter and assure the government of the support of the public and concerned NGOs. Dato’ Zainol also said that the government has been very active in calling for the banning of nuclear weapons and will continue to work with like-minded countries, international partners and civil society to pursue the goal of a world without nuclear weapons.