His remarks were delivered by Deputy Foreign Minister Mr. Kamarudin Jaffar at a ceremony where Malaysia signed the instrument of ratification for the TPNW, making Malaysia the 46th country in the world to become a State Party to the treaty. Only four more countries need to ratify the treaty before it enters into force globally. SGM was represented at this ceremony by its president Michael Kok Fook On and general director Koh Sia Feai.

Dignitaries who attended this ceremony included the top officials of the Ministry; Her Highness Tunku Syafinaz Intan, the National Chairperson of the Malaysian Red Crescent Society; ambassadors; former Malaysian diplomats and representative of civil society organisations. 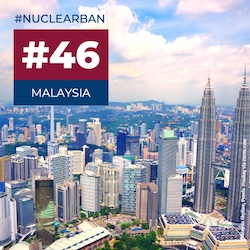 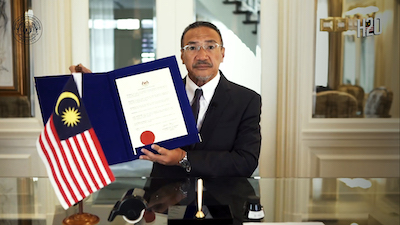 These remarks followed a video in which the Minister signed the instrument of ratification on behalf of the government of Malaysia. The ratification is the culmination of many years of efforts by Malaysia in pursuing an international agenda that places at the top the general and complete elimination of nuclear weapons. Malaysia is one of the first fifty countries to sign the TPNW and has now become of the first fifty nations to ratify the treaty.

Mr. Hishammuddin also remarked that “the coming into entry into force of the TPNW complements international law, and reinforces that nuclear weapons are unacceptable, should not be used, should not be threatened to use, and need to be discarded and destroyed as soon as possible.” These remarks echo the ideals of SGI President Daisaku Ikeda who has campaigned tirelessly for the abolition of nuclear weapons.

In the run-up to this historic event, SGM has worked closely with the Foreign Ministry in various consultative and educational activities. SGM has displayed the “Everything You Treasure – For a World Free from Nuclear Weapons” (EYT) exhibition at over 100 venues nationwide. Today, at this event held at the Foreign Ministry complex, the EYT was also on display, with the Deputy Foreign Minister and other dignitaries also viewing this exhibition. 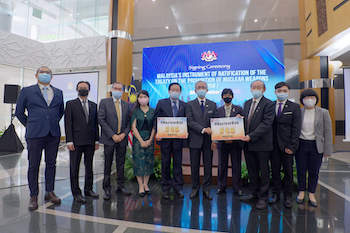 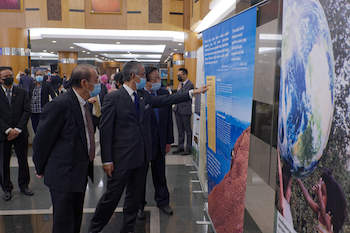 SGM also attended two outreach sessions organised by the Foreign Ministry in November 2019 and February this year, in which SGM representatives shared President Ikeda’s vision of a world free from nuclear weapons and how the common people can play a part in abolishing nuclear weapons.

In order to promote Malaysia’s ratification of the TPNW, SGM launched a social media initiative called “Rakan TPNW” (literally Friends of TPNW), whose name is inspired by President Ikeda’s call for the establishment of a “Friends of TPNW” in his 2019 Peace Proposal to promote the early entry into force of the treaty.

SGM members have also prayed for Malaysia to ratify the TPNW and the treaty’s early entry into force, and worked tirelessly to promote the message of nuclear disarmament nationwide. It is all the more significant that this ratification took place in September, SGM’s Month of Peace, which was inspired by second Soka Gakkai president Josei Toda’s Declaration for the Abolition of Nuclear Weapons made on September 8, 1957.