LinkedIn
Looking back, I realised that I was a shallow-minded youth who was constantly in debt. But meeting this life philosophy has become my greatest treasure. I’ve learnt to live with a sense of responsibility and appreciation for the sake of my own happiness and that of others, as well as develop a never-defeated attitude in overcoming challenges.

“Money IS happiness!” This was Eric Lee’s life philosophy since he was a child. Born into a poor family, Eric began earning his own keep at the age of 11. He ran a sugarcane juice stall in his hometown Ipoh to earn pocket money. Despite developing good habits of saving money, he often had to empty them to help with family expenses.

To make a living, Eric left school two years into his secondary education. He travelled to Kuala Lumpur on his own to learn the ropes of becoming a cook. Two years later, he left for Singapore and worked various jobs in factories, shipping and sales. However, no matter how hard he worked or skimped to save his wages, Eric often found himself in the same situation of sending all his money back home to salvage a family emergency.

Stranded in this loop for ten years, he finally returned home to start anew. He decided to go into the fruit distribution business, completely unaware of the looming economic downturn. To his dismay, Eric began to accumulate debts.

Falling into the abyss of suffering, Eric spent plenty of money and time strategising ways to turn his fortune around, all to no avail. At that time, Eric believed religion served only two purposes; to secure a good afterlife and to help generate more wealth.

It was also then, that Eric met a Soka Gakkai Malaysia (SGM) member and was introduced to Nichiren Buddhism. She shared with him about chanting Nam-myoho-renge-kyo and the act of sharing Buddhism with others that enables one to accumulate good fortune and most significantly, transform one’s karma. Convinced of the power of the Mystic Law, Eric began practising and started sharing his Buddhist practice with those around him. Through consistent Buddhist dialogues, Eric learned to treat others with sincerity and began to win trust in his work.

However, just as stated in the Writings of Nichiren Daishonin, “Foolish men are likely to forget the promises they have made when the crucial moment comes”(WND-1, p. 283).) Faith like fire cannot resist the blow of inciting influences such as short-term gains, worldly honour, and censure. As Eric’s finances began to change for the better, arrogance took hold of him.

“I was truly arrogant and foolish at that time”, Eric recalled. 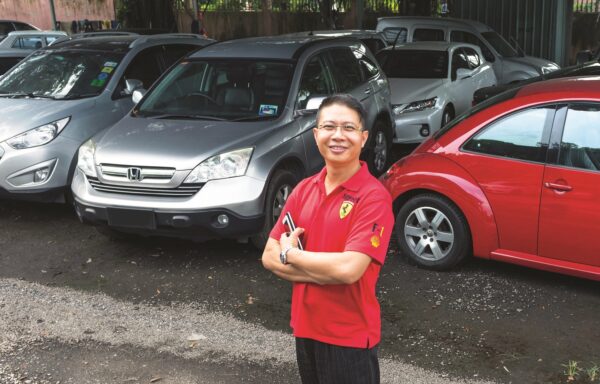 Eric soon switched his business to selling cars. However, without fully transforming his attitude of dealing with others and handling his business, Eric soon returned to his old ways and constantly sought easy and quick success.. This time around not only did his finances plummeted further, he found himself entangled in heavier debts than before.

Alerted by the situation, the SGM member who introduced Eric to the practice encouraged him to return to faith. This person’s sincere compassion deeply encouraged him. Moved to tears by her earnest action, he felt grateful to be a part of the SGM organisation. Through the dialogue, he realised that the problems he repeatedly faced arose due to his greed and his yearning for instant gratification.

Fully Manifesting Our Greater Self

Setting off with fresh determination to transform his karma, Eric vowed to pay off all his debts and share the joy of practising Nichiren Buddhism. He also vowed to transform the existing karma of mental illness that ran in his family.

Eric immersed himself in sharing Buddhism and doing his human revolution. Through the practice of Buddhism, Eric learns to expand his life to contribute to the happiness of others. Up until today, he has spoken about this Buddhist life philosophy with over 200 people and determines to continue doing so. He also made changes in managing his business, and has patiently rebuilt the company with his partner. In a short period, he managed to pay off the outstanding debts.

Continuing to Write His Triumphant History

Since taking up the practice 22 years ago, Eric has triumphantly achieved all his goals. His family members have also transformed their lives through practising Nichiren Buddhism. With the spirit of moving forward just like a spinning top, he has created a fulfilling life filled with countless victories.

“Looking back, I realised that I was a shallow-minded youth who was constantly in debt. But meeting this life philosophy has become my greatest treasure. I’ve learnt to live with a sense of responsibility and appreciation for the sake of my own happiness and that of others, as well as develop a never-defeated attitude in overcoming challenges. This is how I lead a life of value creation.”

With this clear conviction, Eric continues to forge ahead, writing his own story of happiness and victory.

The World Is Your Stage