Soka Gakkai Malaysia’s (SGM)
Statement on the Entry into Force of the Treaty on the Prohibition of Nuclear Weapons (TPNW)
– Everyone has the right to life. A world with nukes is not an option! – 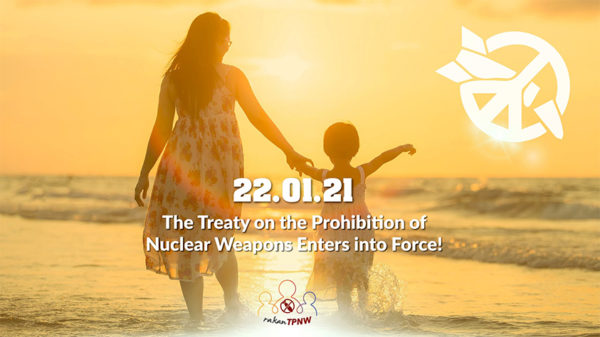 Soka Gakkai Malaysia (SGM) wholeheartedly welcomes the entry into force of the Treaty on the Prohibition of Nuclear Weapons (TPNW) on 22 January 2021, 90 days after the Treaty reached its 50th ratification. The entry into force of the TPNW establishes the norm that nuclear weapons are immoral and illegal. This is a momentous day that humanity has been longing for— a day that marks the beginning of the end of nuclear weapons.

When the treaty was adopted in 2017, Soka Gakkai International President Dr. Daisaku Ikeda who has been a longstanding proponent of nuclear abolition said, “The peace of humankind as a whole and the collective right to life of all the world’s people must be the starting point—the foundation from which we work to eliminate nuclear weapons and develop a new security paradigm for the 21st century.” The Soka Gakkai has, since 1957, started advocating for nuclear abolition following the historic Declaration Calling for the Abolition of Nuclear Weapons made by its second president, Josei Toda.

In Malaysia, SGM has been actively promoting peace and disarmament education through anti-nuclear exhibitions, talks, peace runs and social media platforms known as “Rakan TPNW” and working with others to build solidarity towards the goal of a world without nuclear weapons.

The entry into force of this treaty has been a journey that involved collective efforts from governments, United Nations and its agencies, civil society organisations, academicians, peace activists including the Hibakushas (survivors of nuclear bombings). Malaysia has been working very strongly in promoting nuclear disarmament discourse and has played a crucial role in the international fora that led up and called for the negotiation of the TPNW in 2017. On 30 September 2020, Malaysia signed the instrument of ratification of the TPNW and became the 46th state party to the Treaty.

The entry into force of the TPNW is a ray of hope for humanity amid various challenging issues including the CoVid-19 pandemic, climate change, growing tension between nations and people. It is a great example that proves that as long as there is solidarity among the people, there is no impasse that could not be surmounted. SGM offers deepest appreciation to all who have been striving earnestly with unwavering conviction in ridding the world of these inhumane weapons. SGM is fully committed to continuing our efforts in spreading awareness and building solidarity towards the realisation of a world free from nuclear weapons.

In celebrating the entry into force of the Nuclear Ban Treaty on 22 January, SGM has launched a #TPNW Entry into Force (EIF) Celebration Pack which consists of virtual backgrounds and stickers that the public can use to spread awareness on this significant occasion which will be widely celebrated around the world.