On July 24, SGM premiered on the SGM Broadcast Channel Official on YouTube the third and last session of the year in studying The Wisdom of the Lotus Sutra. The final theme was “The Eternity of Life” with study materials from the fourth volume of the series. The Chinese session was conducted by SGM young women’s division vice-leader Lim Lee Fen and SGM high school division vice-leader Nelson Tan Zhi Ying, while the English session was delivered by SGM men’s division secretary Looi Chee Choong. Up till August 6, the combined viewership for both videos were 22,500. 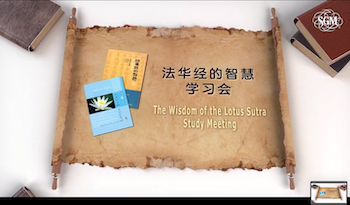 The speakers first introduced the significance of life and death as mentioned in early Buddhist teachings and the Lotus Sutra, with the former saying that one can only break the cycle of birth and death, or karma, by eradicating their desires, thus making people unable to see how they could change their karma.

Meanwhile, the “Life Span” (16th) chapter of the Lotus Sutra stated that this sutra contains the vital doctrine for freeing people from the sufferings of birth and death. It does not require people to “run away” from the cycle of life and death, but to face it directly with a correct attitude.

Later, the speakers talked about the meaning of death and how karma continues to work even after death. They discussed the principle of the nine consciousness and emphasised that the ninth consciousness, the amala consciousness, can change one’s karma accumulated from past existences and can be brought forth when one believes in the Gohonzon.

In addition, Shakyamuni teaches in the “Life Span” chapter that “in order to save living beings, as an expedient means I appear to enter nirvana but in truth I do not pass into extinction,” (LSOC16, pg 271) meaning that he intended to use his death as a means to awaken his disciples to seek his teachings. The speakers used this to draw parallels to when Mr Makiguchi Tsunesaburo, founding president of the Soka Gakkai, died in prison during World War 2 and how his disciple Mr Josei Toda, second Soka Gakkai president, was awakened to his mission as a Bodhisattva of the Earth and vowed to strive for kosen-rufu. This is also the core spirit of this chapter of the Lotus Sutra.

Furthermore, President Ikeda said, “The important thing is that right now, without hesitation, we do our best to accumulate ‘treasures of the heart’ that will endure eternally.” One only attains a state of “immortality” when one dedicates one’s life and makes continuous efforts to actualise the great vow for kosen-rufu and people’s happiness. Therefore, when one practises Nichiren Buddhism, one will be able to live through one’s life knowing that one will be free from the cycle of life and death, and eventually attain Buddhahood.

In conclusion, what matters the most is how one lives one’s life and creates value in the present form. The speakers also urged the viewers to do their best in reaching out to encourage people during this COVID-19 pandemic, giving them happiness, thus living a contributive life.