The Princess and the Moon is a children’s story written by SGI President Daisaku Ikeda about appreciating people and helping them reveal their true brilliant and open-hearted selves. An inspiring story about making our self shine even in the toughest situation, it has been published in nine languages and adapted into an animated film which had been broadcasted in Malaysia.

On August 19, the SGM Kuala Lumpur Rainbow Junior Performing Art (RJPA) group and Rainbow Junior Choir (RJC), two performing groups made up of Junior Division members, staged a musical inspired by this story at the Ikeda Peace Auditorium of the SGM Culture Centre.

To stage The Princess and the Moon musical, RJPA and RJC, and their supporters, strived for over six months. During this time, they wrote songs, practised dance steps and built their own props and sets. 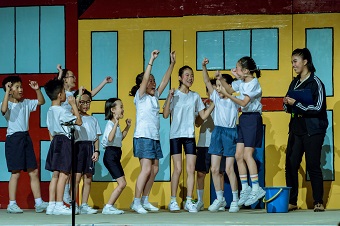 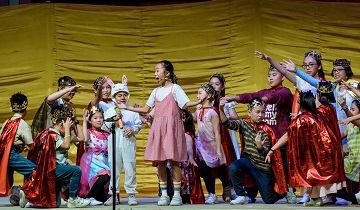 This musical is part of a series of art appreciation programmes by the SGM KL culture groups.

Divided into six acts, the tale tells of Sachiko, a young girl who does not like to eat and has problems getting along with friends in school. Even her parents’ encouragement could not lift her spirits.

One night, the rabbit that lives on the Moon travels into Sachiko’s room via moonbeam, and tells her that on the moon, there is also a girl named Sachiko, but this Sachiko is a happy, cheerful and high-spirited person, unlike Sachiko on Earth.

Together, they travel to the moon, and Sachiko sees that the girls and boys on the Moon are treated like princesses and princes, and therefore, their happy true self shines brilliantly. Sachiko learns about her “true self” and upon returning to Earth, learns how to treasure other people and become a kind, bright-hearted person who devotes herself to helping others. 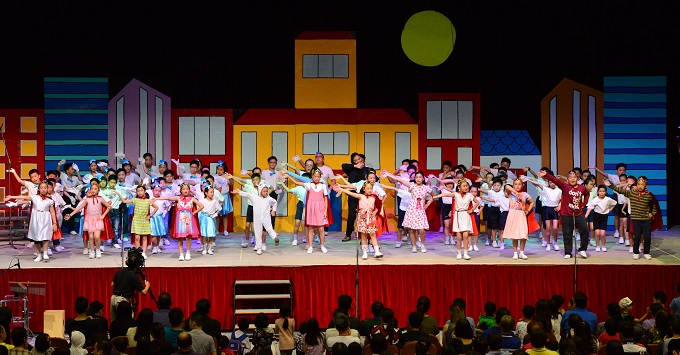 The young children of the performing groups and their older coordinators did their very best to put up and entertaining and heart-warming musical in front of an audience of over 1,000 people. The painstakingly-built sets provided a brilliant physical scene, and the performers with their attractive costumes and lively acting drew the admiration of the crowd. The most attentive were the young children who came as audience members. Many of them made their way to the very front to sit on the floor and were mesmerised by what happened on stage.

The performers closed the night by performing “The Moon Knows,” an original composition. After the performance, SGM President Michael Kok congratulated the performers for their wonderful show.