In conjunction with the International Day for the Total Elimination of Nuclear Weapons which falls on September 26, SGM hosted a forum on this topic, on that very day itself. This forum is also part of SGM’s Month of Peace activities. The topic for the forum was “Everything You Treasure: For a World Free from Nuclear Weapons”, the same as the recently-concluded anti-nuclear weapons exhibition held nationwide. 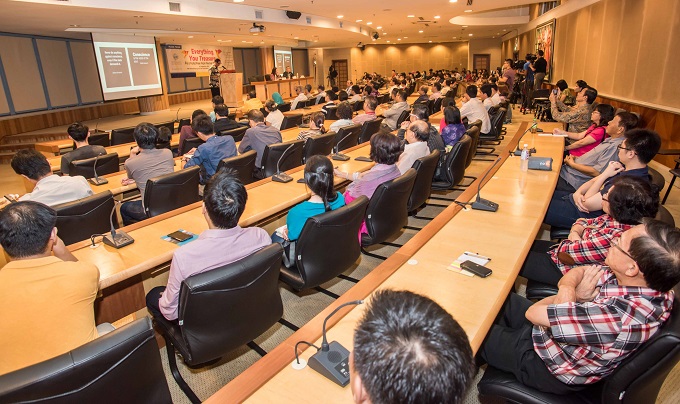 The forum took place at the International Conference Hall of Wisma Kebudayaan SGM, with some 150 people in attendance. The speakers were Prof Tan Sri Dr Dzulkifli Abdul Razak, International Association of Universities (IAU) president and Prof Dato’ Dr Christopher Boey, Deputy Dean at University of Malaya’s Faculty of Medicine. It was moderated by Dr Wendy Yee, senior lecturer at the University of Malaya.

The purpose of the forum is to add further momentum to the abolitions of nuclear weapons through the solidarity of the people via dialogue and discourse. Humanity has lived with the existence of these apocalyptic weapons for 70 years and the threat of annihilation hangs over the global community as long as they still exist.

Before the forum began proper, two members of the SGM Student Division presented the results of the peace survey SGM conducted in the run-up to September, SGM’s Month of Peace. The survey aimed to gauge the perceptions of Malaysians towards peace and nuclear weapons. More than two-thirds of respondents are aware of the existence of nuclear weapons (85%) and agree that they need to be banned worldwide (82%).

Prof Tan Sri Dzulkifli’s segment concentrated on the issue of “conscience”, noting that many of the world’s greatest scientists played a part, one way or another, in making the atomic bombs that ultimately led to the destruction of Hiroshima and Nagasaki. He quoted 16th-century French writer Francois Rabelais who said, “Science without conscience is the death of the soul,” noting the danger of pursuing knowledge without moral and ethical restraints.

He also spoke of the experiences of his late father, Datuk Abdul Razak Abdul Hamid (1925–2013), the sole Malaysian survivor of the atomic bombing of Hiroshima on August 6, 1945. Datuk Abdul Razak, who is fondly known as Razak Sensei for his efforts in promoting Malaysia-Japan friendship, was a student at the then Hiroshima Bunn University (now part of the present-day Hiroshima University). Witnessing the destruction, death and suffering wrought by nuclear weapons, Razak Sensei became a lifelong peace activist and became a role model for Tan Sri Dzulkifli.

Prof Dzulkifli also shared his father’s five principles for living which included being humbled and dignified, rejecting all forms of aggression, contributing sincerely, and living up to one’s principles for the sake of peace. He concluded by quoting Harvey Mackay: “The heart of education is the education of the heart.”

Dr Boey outlined five points of discussion focusing on the inhumane nature of nuclear weapons and specific proposals for abolishing them, why abolishing these weapons are difficult, the need to re-establish our priorities, continuing with hope and courage and how each of us can act in this area.

The global community must re-humanise politics and economics in order to ensure that the well-being of each human being is the top priority, instead of political and economic supremacy. The race for supremacy led to the development of nuclear weapons, which has cast a pall on the survival of humanity since.

However, he stressed that there is no reason for us to abandon hope and courage; if anything we must advance with even more hope and courage and build a network of friendship and peace. Each person can act for the sake of advancing peace through treasuring and empowering each individual and creating a solidarity of empowered individuals.

Dr Boey ended by quoting Nobel Peace Prize laureate Dr Joseph Rotblat (1908–2005): “I believe that people have the power to influence society. No effort is a waste. When a small stone is thrown into a pond, the ripples travel widely out from the centre. Though the ripples may become less powerful, they still do not disappear completely. Every person has the power to create ripples that can change society.”

A lively question-and-answer session followed with the speakers fielding thought-provoking questions from the audience.