The forum was held following the adoption of the historic Treaty on the Prohibition of Nuclear Weapons by 122 countries at the United Nations on July 7, 2017. The Treaty was opened for signature on September 20 and offers a chance for a world free from nuclear weapons, which pose the greatest threats to the right of life on Earth. It shall enter into force 90 days after ratification by 50 member states. 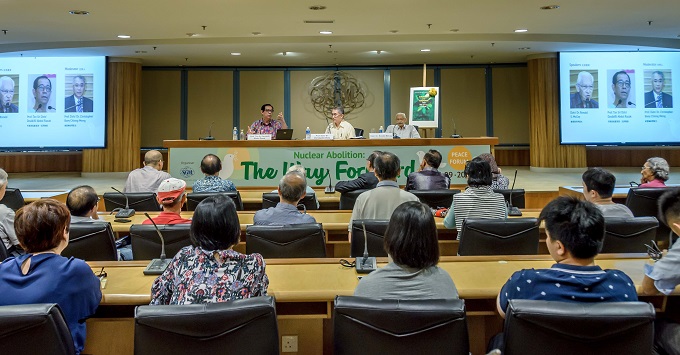 As the challenge ahead is to make the significance of the Treaty widely understood and to garner solid support, two speakers were invited to shed light on the issue. Speakers Dato’ Dr Ronald S. McCoy, Founder and Past President of Malaysian Physicians for the Prevention of Nuclear War, and Prof Tan Sri Dato’ Dzulkifli Abdul Razak, 14th President of International Association of Universities (IAU) were present at the peace forum which was moderated by Prof Dato’ Dr Christopher Boey Chiong Meng, Vice-President of Soka Gakkai Malaysia and Deputy Dean of the Faculty of Medicine, University of Malaya.

Starting off the forum, Dato’ Dr McCoy shared how he found the existence of nuclear weapons running contrary to his purpose and objective of work. As a doctor, he also found it inconceivable to have about 15,000 nuclear weapons around the world, mostly possessed by the US and Russia, as a hundred of these weapons of mass destruction are enough to destroy Earth. No countries can protect themselves from their destructiveness as the effects cross national boundaries easily and last for thousands of years, rendering the doctrine of deterrence totally futile. He was also of the opinion that should nuclear weapons continue to exist, nuclear war is inevitable.

Calling the Treaty a significant step forward which, when signed and ratified, will make nuclear weapons illegal as with cluster bombs or biological weapons, he warned that the journey to rid nuclear weapons will be a long one involving a lot of work. He was also personally present at the negotiations during the formulation of the Treaty. 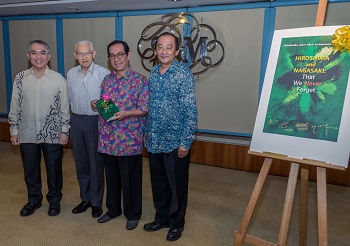 Prof Dzulkifli shared some enlightening historical details and the mindset behind the creation of wars. He showed evidence of how wars were not meant to be stopped as wars can bring huge profits to groups with vested interests. In the intention to protect their own nations and to build weapons that kill more people, numerous technologies were developed, some of which are drones, the Internet and telecommunication devices. Marketing ploys and strategies – including perpetrating lies – to make such devices become an inseparable part of our lives were also developed. Justification for the use of wars was also created.

Clearly seeing that humanity is moving towards a world out of balance leading to destruction, loneliness and suicides, Prof Dzulkifli arrived at the conclusion that the world needs a thorough change of mindsets.

In closing the forum, Prof Boey pointed out that the real enemies of peace are not the countries, peoples or weapons per se, but a mindset that justifies the use of such weapons and denies the dignity of life. He arrived at the conclusion that the world’s citizens need to spread the conviction of the supreme dignity of life, empower people to create a solidarity of empowered individuals, especially youth, and persevere with courage and hope. He called on each participant to stand up with determination, unite and take action to bring about the abolishment of nuclear weapons.

In conjunction with the forum, a new book entitled Hiroshima and Nagasaki: That We never Forget – Hibakusha Share Their Testimonies of Survival was launched. The book consists of 50 testimonies by hibakushas collected by the Soka Gakkai Youth Division of Japan and was published to commemorate the 60th anniversary of second Soka Gakkai president Josei Toda’s declaration calling for the abolition of nuclear weapons in September 1957.