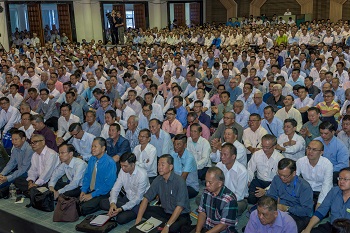 With around 2,000 MD members from all over Malaysia in participation, the meeting was held in the spirit of togetherness with President Ikeda.

The meeting was kick-off with a rousing choir performance by members of the Young Mister and Great Wall Groups. The song rendered was the well-beloved Dainanko, regarded by SGI as exemplifying the bond of mentor and disciple. The song tells of the parting of a warrior chieftain Kusunoki Masashige and his son Masatsura as the former leaves to fight against enemy forces. As defeat was imminent, Masashige urged his son to return home, quickly grow up to be a fine man and serve his country.

Then three MDs shared their victory reports. The first, SGM Penang Region Vice-Leader Toh Keat Heng, shared how he changed their priorities in life and won his way back to living the great path oneness of mentor-and-disciple. The other two from Kuala Lumpur, KL Region 5 Leader Tan Chee Wah and KL Region 2 Leader Steve Chan Soong An shared how forging a stronger faith, carrying dedicated home-visits and sincerely showing concern for the members solved their problems at work and developed a more united region. 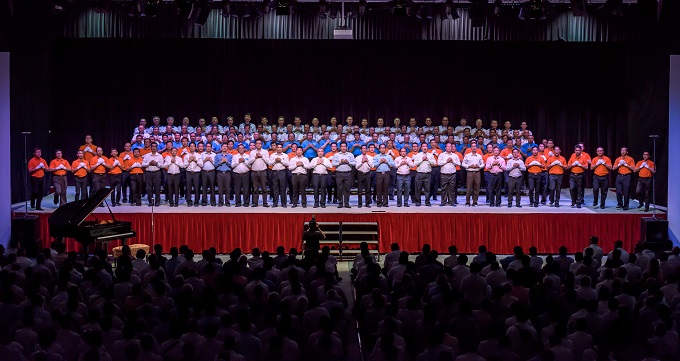 This was followed by SGI Director Dr Akash Ouchi’s encouragement in which he reminded the audience of the profound significance of August 24 and how it embodies the great spirit and the eternal foundation of the SGI. He recounted various key dates and events in the history of Soka Gakkai and elaborated on their significance in shaping the SGI today, touching on the origin of the famous ever-victorious Kansai spirit and the Osaka Campaign.

In his efforts to rouse up the members’ spirit to stand up and fight there and then, Dr Ouchi spoke on the importance of the final five years of one’s life. He also warned the audience against becoming “worms in the lion’s body” or believers who could destroy the organisation.

In his closing remarks, SGM General Director Koh Sia Feai mentioned that during the long period of seventy years since taking faith, President Ikeda has never once retreated or gave in to obstacles. He urged the audience to rise up as golden pillars and successors and emulate the mentor’s example of remaining unchanging in determination despite facing endless hardships. He also reported that on that day, August 24, the members of SGM Kuala Lumpur, led by the MD, had achieved 777 professors of happiness, exceeding their target of 750. 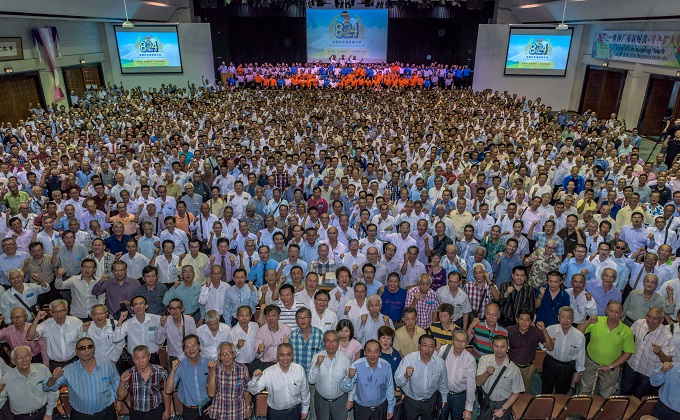 Prior to the meeting, an MD state central leaders meeting was held at the Kinenkan Prayer Hall with a participation of about 70 leaders. Dr Ouchi was also present to offer guidance. During this visit, he also visited members in Muar, Johor and Kuala Lumpur to offer them guidance and encouragement.*