On August 19 and 20, 178 exuberant Student Division (SD) members from Soka Gakkai Malaysia (SGM) and Singapore Soka Association (SSA) gathered at the SGI Asia Culture and Education Centre (SGI ACEC) for a historic SGM-SSA Student Division Training Course. This is the first time SD members from the two countries have held a joyous and inspiring gathering of future successors together. 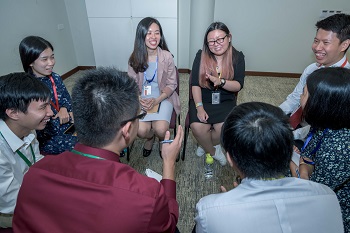 Arise! Advance Courageously as Shin’ichi Yamamoto!” was the theme of this training course and the determination that each participant engraved in their hearts. This theme was inspired by the “Great Mountain” chapter of The New Human Revolution, SGI President Ikeda’s serialised novel. Shin’ichi Yamamoto, the protagonist of the novel, is the personalisation of President Ikeda. This theme also expressed the ambition of the SD to blaze a new trail in the spirit of many in body, one in mind.

This year marks the 60th anniversary of the establishment of the SD by second Soka Gakkai president Josei Toda. Joining the participants were SGI Director Dr Akash K. Ouchi and senior Youth Division leaders from both countries.

President Ikeda also sent a message for this auspicious occasion. In his message, he asked the participants to “strive to polish your characters and exert yourselves to your utmost in your studies.” He further added, “My abiding hope is that you will all develop yourselves to become leaders who dedicate their entire lives to working for the happiness, peace and security of ordinary people.”

The SD leaders of both countries reported on the activities of SD members in their respective countries. SGM SD Leader Chang Chung Bin said that the SGM SD members are focussing on expanding the solidarity of the Bodhisattvas of the Earth and participating actively in organisational activities. In conjunction with SGM’s peace month activities, the SDs in each state will organise Peace Proposal presentations in local districts or their campuses. In addition, SGM Selangor SDs have collaborated with the United Nations High Commissioner for Refugees (UNHCR) office in Malaysia and visited the Rohingya refugees to understand the challenges and needs of Rohingya youth living in Malaysia.

Next, SSA SD Leader Chia Meng Hwee stated that the SDs of Singapore played a pioneering role in taking the lead to participate in peace, culture and education-related activities. For peace, the SSA SDs often hold dialogues that transcend religions with youths who profess different faiths; for culture, they have been participating in large-scale culture activities, such as the Chingay parade and National Day Parade; for education, the friendship forged between SSA SD seniors with Singapore Management University has paved the way for them to support the annual Singapore Management University Annual Ikeda Peace and Harmony Lecture series. 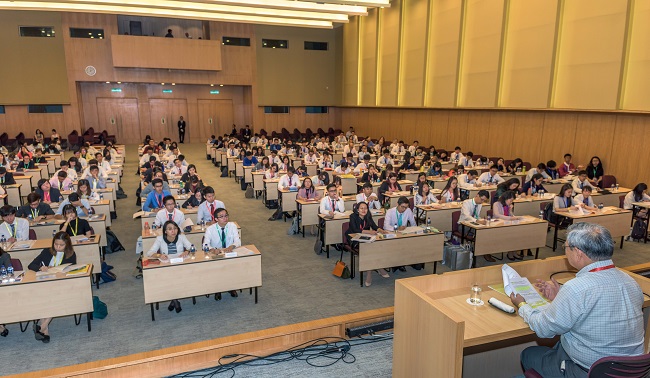 After that, Dr Ouchi delivered a Gosho study based on President Ikeda’s study lecture series on “The Heritage of the Ultimate Law of Life”, stressing that “many body but one in mind” is the key in advancing kosen-rufu in the Latter Day of the Law. The students also shared their experiences and joy in sharing Buddhism.

The following day kicked off with experience sharings. The following day, in one of the experiences shared, SSA representative Tracey Wong Choy Yee shared her joy as she had achieved her human revolution through doing shakubuku. Through practising President Ikeda’s guidance, she overcame interpersonal relationships issues in her university club, gaining the trust of her club members. She had successfully encouraged a “troublemaker” friend to start chanting, giving her great joy. She too renewed her vow to look forward to visit the Lotus Sutra exhibition to be held in Singapore in 2018 and bring her friends along. She will also make sure she put into action the spirit of respect for humanity as depicted in the Lotus Sutra exhibition.

SGM SD representative Teh Ei Lin experienced the sorrow of falling into the painful pit of a breakup. But through involving herself in dialogues and introducing patients in the hospital she works in to Nichiren Buddhism, she recovered her hope and courage, awakened to the fact that she possesses an infinite potential to continue her journey and advance on the great path of kosen-rufu.

SSA General Director Tay Eng Kiat urged that every SD member should involve themselves in the crucial mission of becoming the Shin’ichi Yamamotos of the new era, to continue learning and create breakthroughs through sharing Buddhism and play their roles to the fullest on the world stage.

SGM General Director Koh Sia Feai expressed his expectation for the SDs to appreciate their youth, study hard, hone their abilities, grow up quickly and become capable persons in contributing to the society. He also hoped they would become SGM’s core leaders, Asia’s capable leaders and use their life to contribute to the happiness and peace of all humanity, repaying their debt of gratitude to President Ikeda.

Together they sang beloved SGI songs such as Strive for Kosen-rufu, Youth, Scale the Mountain of Kosen-rufu, Dainanko and Youth with a Noble Vow, engraving our mentor’s expectations for them deep inside their hearts. Many of the participants also expressed their resolutions to advance worldwide kosen-rufu and open a path for the eternity of the Soka Gakkai.

The flames of faith generated within the lives of these capable youth are bound to inspire each other to resolve in becoming Shin’ichi Yamamoto, spreading humanism to all corners of the world!