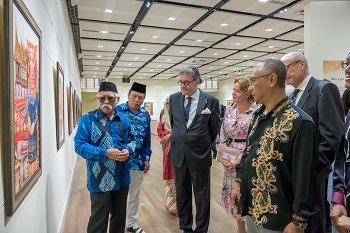 On November 11, 2018, SGM was honoured with a special visit by the Prime Minister of Malaysia, YAB Tun Dr Mahathir bin Mohamad. At about 9:45 AM, Tun Mahathir arrived and paid his maiden visit to Wisma Kebudayaan SGM (WKSGM), the first by an incumbent prime minister. The historic visit which lasted for slightly over an hour created a new milestone in the history of SGM and kosen-rufu in Malaysia.

The Prime Minister was here to officially open the “Splendours of Malaysia – Paintings of Ethnic Cultures of the Land”, exhibition, which featured 59 artworks by renowned local artist Ismail Embong and his daughter Emma Maembong. The paintings in oil and acrylic depict the beauty of faces and richness of Malaysian ethnic groups from all over the country, showing the captivating diversity within a multi-ethnic and multi-cultural nation.

In fact, Ismail, who was conferred the title of National Artist in 2012, has highlighted a colourful and huge segment of society in Malaysia which include the Malay, Chinese, Indian, Iban, Bajau and Kadazandusun ethnic groups. Furthermore, members of these ethnic groups living in different states also display further differences, way of life and customs. There is also a section depicting the history and development of Melaka since the time Parameswara founded the state. Meanwhile, Emma’s works showcase the various costumes worn by these groups, adding significantly to the appreciation of the colourful spectrum of Malaysian life. The exhibition began on October 13, 2018 and ended on December 2. 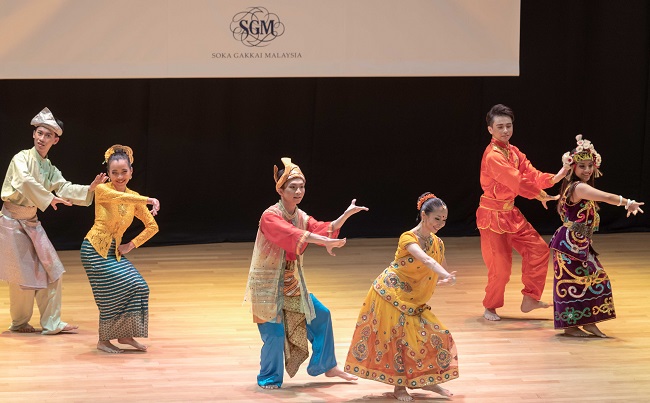 For the opening of the exhibition, Tun Mahathir first visited the bus which Ismail uses as his studio before proceeding to the auditorium where he was treated to a muhibbah dance performance by SGM youth.

As part of his opening speech, SGM President Michael Kok also read out a congratulatory message from SGI President Daisaku Ikeda in which the latter said, “Arts and culture have the power to transcend all kinds of differences including racial and religious disparities, nourish and enrich the hearts of people, connecting them and bringing them closer to one another.” President Ikeda also recalled his meeting with Tun Mahathir and his profound expectations for young people, emphasising on the importance of having dialogues with them. He also urged SGM members to “bring further harmony and inject vibrant energy in Malaysia where different races live together in harmonious coexistence.”

Following that, the adviser of the “Splendours of Malaysia” exhibition, Tan Sri Dato’ Seri Utama Dr Rais Yatim took the rostrum and narrated how Ismail’s art journey has contributed to the struggles of our nation. He hoped to see that the Malaysian art world be given the due recognition and more opportunities to grow.

In his opening speech, Tun Dr Mahathir said that art is food for the soul and commended the artists for using art to promote understanding of cross-cultural relations. He believed that their efforts to “infuse the diversity and present it as an exhibition will allow the visitors to get a glimpse of the different cultures that exist in Malaysia and appreciate their finer points.”

The Prime Minister also mentioned that art in Malaysia has become the mirror to reflect the diversity of races and cultures besides being the link to connect different races and ethnics. “Such art exhibitions are needed to show how diverse our cultures are,” he said, “and will directly give positive values to interracial relationships.” 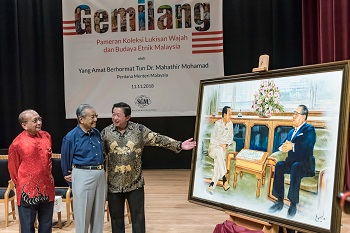 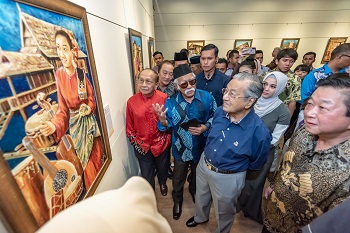 After the opening, artist Ismail Embong presented Tun Mahathir with an artwork he painted, which depicted the first meeting between Tun Mahathir and President Ikeda in 1988, during the SGI leader’s first visit to Malaysia. Tun Mahathir then toured the exhibition, watched a video of the SGM human graphics performance at the 16th Commonwealth Games opening ceremony and later signed another version of the same painting which will be presented to President Ikeda. He also placed his signature on a 152.4m-long scroll depicting the founding of the Melaka in the 1400s until its fall in 1511.

Before ending his visit, Tun Mahathir also wrote in the guest book these encouraging words: “Soka Gakkai has done a great job in training of the youths of Malaysia. I hope they will continue with this good work. Thank you.”