Seeds Of Hope And Action

by COSMIC Editorial Board 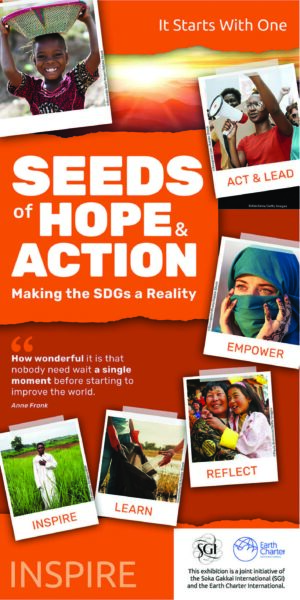 In 2011, a 16-year old Dutch boy named Boyan Slat went diving in Greece. What he found there was there were more plastic than fish. Later, while still in high school, he made ocean plastic pollution the subject of his school project. He later came up with the idea of building a passive plastic catchment system, using circulating ocean currents to net plastic waste, which he presented at a TEDx talk in Delft in 2012.

In 2013, he founded a non-profit, The Ocean Cleanup, with 300 euros of his own savings to develop advanced technologies to rid the world’s oceans of plastic. He even dropped out of university to devote himself full-time to The Ocean Cleanup.

Along the way, he met with various setbacks, such as technical failures that caused a part of the vessel to break, and met with scepticism from various parties, including renown international media outlets.

But Boyan persevered, and his results bore fruit. The Interceptor began to show great results, and has been deployed in several countries. In fact, two of these Interceptors have been deployed to clean up the Klang River! The Ocean Cleanup aims to remove 90% of the ocean plastic waste by 2040.

Selina Neirok Leem from the Marshall Islands is a passionate young climate advocate. Her home is at risk of being submerged by the ocean in the near future. She is a member of Jo-Jikum, a local youth environmental organisation. In 2015, at the age of 18, she spoke at the Paris Climate Convention (COP21), as the youngest delegate.

Seasonal flooding and evacuation were becoming more frequent in the Marshall Islands due to climate change. She and her fellow islanders are watching a way of life disappearing. However, instead of giving in to anger and helplessness, she decides to educate people on the effects of climate change and what they can do.

“We’re a very small number, but we’re very spirited and we want to fight for our country because we believe that it’s also for the survival of the world.” These words are found on the “Seeds of Hope and Action: Making the SDGs a Reality” (SOHA) panel we feature here.

These are just two of the inspiring stories featuring youth that are highlighted in this exhibition. They overcame their initial sense of being overwhelmed and rose up to take action to help transform the world, one step at a time, from where they are.

SOHA also features other inspiring stories that will awaken our minds and perceptions on climate change and other issues surrounding sustainable development.

The exhibition stresses our interconnectedness with the rest of the community of life and the need to broaden our sphere of compassion. It encourages viewers to overcome feelings of powerlessness and highlights the fact that a single individual can initiate positive change.

This 25-panel exhibition also introduces a positive vision for sustainable living that can contribute to the realisation of the Sustainable Development Goals (SDGs).

SOHA employs the “Learn, Reflect, Empower, Lead” formula derived from SGI President Ikeda’s proposals on education for sustainable development (ESD) and is a resource for the UNESCO initiative ESD for 2030 (Education for Sustainable Development: Towards Achieving the SDGs).

The SOHA exhibition is an updated version of the “Seeds of Hope: Visions of sustainability, Steps towards Change” (SOH) exhibition created in 2010 to mark the 10th anniversary of the Earth Charter. The initial section introduces the idea of interconnection with inspiring quotes from different spiritual and faith traditions. There are newly added panels on climate change, the SDGs and the Mapting app, and QR codes now provide links to further information for online use. An interactive page has been created to collect online viewers’ ideas for action inspired by the exhibition.

It is a very useful educational resource and tool to awaken people to the challenges confronting humanity, but also to inspire people to overcome possible helplessness and powerlessness, and ask “What can I do?” In fact, the very first panel says, “It starts with one.”

SOH was first shown in Malaysia in 2011, and since then, it has toured hundreds of venues and seen by hundreds of thousands of people nationwide. It has been shown in schools, universities and other important venues such as the National Science Centre.

As Malaysia becomes more exposed to the threats brought by climate change, it is also time we do more to educate ourselves and the people around us through SOHA.